What are the multiple professions that bring the company Disney To Life today?

When thinking of giant corporations that seem to shape the world today, what companies come to mind?  Is it Amazon? Apple? Perhaps it’s Walmart?  I know that the first thing that popped into my head isn’t something many would expect.  I’ll give you a hint, the face of the company has mouse ears and red shorts.  If you guessed Disney, you’re correct!

Disney is a company like no other in my opinion.  It has 2 theme parks, produces some of the most well known films in today’s history, as well as become so popular to be able to develop its own streaming service, which as we all know, has taken the world by storm for the past 10 years.  However, how did it become such a giant company to accumulate Marvel and Star Wars, as well as many other of the world’s most popular franchises?  Who’s the CEO of the company, and in recent years who has steered the company to success?  According to Investopedia, as of March 20,2019, Disney bought 21st Century Fox for $71.3 billion dollars, making it the largest media powerhouse on the planet, but what caused them to accumulate that money to earn that title?

The Climb to Success

Not surprisingly, even after the highly grossing film “Mary Poppins” Disney went downhill after the death of Walt Disney in 1966. The company was actually thought to be undervalued  in terms of brand assets, meaning that it wasn’t brought to it’s full potential.  The company flourished throughout the 80’s and 90’s and is now considered one of the biggest entertainment empires in the world.  This was due to the creation of more theme parks such as Walt Disney World, cruises, memorable movies being made by the year as well as much more.  I know when I think of an “empire” what comes to mind for me  are giant oil companies or software, but animation and production can be just as successful!  Michael Eisner as Ceo and Frank Wells as president had turned Disney films from “Escape to Witch Mountain” and  “Tron” into “The Little Mermaid,”   “The Lion King” and “Beauty and the Beast.”

The Arts and Sciences within the Magic 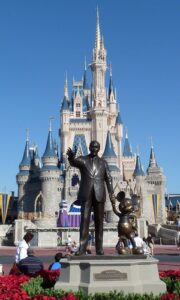 However, Disney isn’t only known for its animation and fairytale movies.  Now that both Disney parks are popular, Disney World accumulates about 57,400 guests per day, which personally I can’t even imagine that many people coming from that I’m from a small town. Amusement Parks need a lot of scientists and engineers as well, speaking of the fact that Rocking Roller Coaster and Mount Everest are so popular, the safety of the guests matters most to the Disney Corporation. They even came up with the name “Imagineers” which brings an art form into the engineering field involving Disney.

Today, with Bob Chapek’s help of growing the company within recent years (including skyrocketing the success of Disney’s Frozen) there are jobs within the field of Disney for almost everyone!  Studied finance in college?  Become Disney’s senior financial analyst!  Interested in gaming design? There’s a job for you at Disney?  Maybe you have an interest in merchandise or marketing, Disney has you covered.  Disney even has jobs not necessarily for everyone with a college degree, use your customer service or acting skills to work with Disney!  It’s truly a one of a kind company that allows people of all backgrounds and passions to join.

Whether you’re an actor, screenwriter, mechanical engineer, animator, architect, Disney has a place for you!  How can it not be one of the most creative businesses in the world?  There’s so many ways to get involved within Disney. Are you interested?