Last year I co-developed and co-led a course titled  “Street Smarts: The Future of Urban Living” with two fellow Union College students. The goal of the course was to explore art, health and fashion in urban environments, particularly in relation to Millennials.  Each of these topics was explored from a humanities perspective that allowed students to consider how an increased understanding of human culture and expression can be useful when solving problems in these areas.

In preparing and organizing this course, I focused on urban art, specifically in New York City, London, Hong Kong, and Rio de Janeiro. I found myself particularly drawn to examples of urban art projects that had a positive impact on communities. I decided to couple my exploration of transformative art movements with my interest in technology to transform a number of urban art pieces.

The traveling salesman problem is a long standing computer science question that seeks the shortest path between a set of points. Historically the problem was modeled as a set of cities through which a salesman wanted to pass to sell his goods. I choose to use this problem as the basis for my transformations as it combines my technical interests with the cities and relationships explored in my research.

On a more technical level, in order to generate my images I started with a base photograph of an urban art piece. I then used a computer program to turn the photograph into a stippled image. Finally I used a traveling salesman inspired program to connect each of the stipples in the image by an approximation of a shortest path. Based on the specific image being transformed this process was slightly altered, for example the piece discussed in this post, related to Rio de Janeiro, I decided to leave my product in the stippled form and layering was used to create color.

Despite being home to the 2016 summer Olympics, Rio is not a shining city. Rio’s Favelas are home to the city’s poorest residents and are often controlled by violent drug gangs. As a result, moral in these communities is often low, especially in individuals struggling to survive by working in Rio’s landfills. In class we discussed two examples of efforts to bring art to these communities. The example that resonated most strongly was the painting project done by Haas&Hahn. These artists worked with community members to paint in bright color buildings in a Favela.

In class we discussed how bringing art to impoverished communities can have a positive effect and increase member’s pride and respect of their community. We also discussed how these projects do not necessarily have the desired outcome if those bringing the art do not include the community members in the project. The class was wary about such projects as they could end up serving the outside artist more than the community members. This caused me to reconsider the work featured in the film “Wasteland.” Is it okay that the art created was auctioned for millions of dollars? And that only a handful of community members were included in the project? This shows that it is important to be knowledgeable about different cultures and communities so that aid efforts are appropriately suited for those who we want to help. 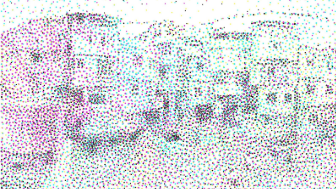 I created the above piece based on Haas&Hahn’s Favela painting. The image is composed of thousands of unique stipples, representing the individuals in the Favela community. Every individual contributes to their community, which is an idea I believe was strengthened through Haas&Hahn’s project. Similarly, each of the stipples is necessary to create the desired effect, which is most visible from a distance

I remember a particular student in the class whose views on the value of urban art shifted over the course of the term. As a science major she was originally skeptical that urban art could have any real positive effects on society. Throughout the course she was able to explore various instances of urban art and see examples where it did in fact foster change. In addition to the Rio example discussed above, we also explored art in Hong Kong’s Umbrella Movement and street art programs that encourage at risk youth to participate in creative outlets.  This highlighted, to me, the need for increased exposure to ideas and concepts from outside of our main areas of study, especially those that pertain to real world problems. In our class we considered the positive impact that applying humanities knowledge to global health problems could have in times of crisis, such as contagious disease outbreaks.

Developing and leading this course has reminded me to be open to the ideas that new perspectives bring. Interdisciplinary thinking can be very challenging, but the results will help shape the future. With the shrinking of the world comes an increase in shared, global knowledge.

How can we use insights and findings across a wide range of cultures and academic disciplines to solve problems and improve the state of the world? I believe the first step is equipping the next generation with the tools needed for interdisciplinary thinking and an understanding of a world outside of your backyard, in terms of culture, discipline and identity.

Elizabeth is a graduating senior at Union College