“What are you going to do with that degree?” Sadly, many students in the liberal arts and humanities have gotten used to that condescending question by now. With economic downturn in 2008 and a job market demand trending towards science and engineering degrees, a specialized education seemed like the obvious solution to steady employment in a tough market.

But trends in industry and the very nature of work since then are beginning to paint a very different picture of the future. A recent study even suggests that this reputation is undeserved and deeply misleading. Instead, it finds a high correlation between a broad undergraduate education and financial success. In fact, those who take the arts and humanities in addition to their main field of study are 31-72% more likely than others to have higher-level positions and earn more than $100,000.

When analyzed in the context of hiring trends and technological change, a new narrative appears. From this view, graduates of liberal arts colleges and universities will have the better return on investment and be better prepared than their counterparts. In fact, there is good reason to believe that a liberal arts education is the foundation for professional success in the 21st century.

Technology and Work in the 21st Century 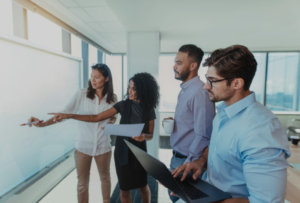 New technologies, like self-driving cars and 3D-printing, are already disrupting the way we work and do business. They represent the groundswell of a wave of technologies expected to fundamentally disrupt the way we live and work. This groundswell is what the World Economic Forum and others call the “Fourth Industrial Revolution”.

According to them, 65% of children entering primary school today will be employed in jobs that do not currently exist. In this brave new future, college graduates can expect to find their careers affected, if not defined by, these changes.

To succeed in the world that awaits them, college graduates will have to apply novel theories and think across disciplines in order to tackle the challenges of the 21st century.They will have to think differently and challenge the status quo. Keen observations full of new possibilities and surprising connections will be their key to success. As a recent Pew poll of experts put it: “workers of the future will learn to deeply cultivate and exploit creativity, collaborative activity, abstract and systems thinking, complex communication, and the ability to thrive in diverse environments.”

Many (including Presidents Obama and George W. Bush) have argued that we simply need to promote STEM education and crank out graduating classes of specialized engineers to help build the technologies of tomorrow. While that may have been sound logic in the past, the fundamental nature of these technological shifts has changed the game significantly. In fact, a new study shows that, while students who complete technical and career-oriented programs have better short-term employment outcomes, they struggle to keep up with changes in industry.

Already, we are seeing many low-skill and manufacturing jobs being lost to increasingly sophisticated systems of automation. But blue-collar workers are no longer are the only ones whose livelihoods are at stake. Accountants and lawyers are among the workers who may lose their jobs in coming years due to automation and big data. Other white-collar jobs are also expected to disappear in coming years. This is making the human element more important than ever.

As billionaire investor Mark Cuban has pointed out: “…when the data is all being spit out for you, options are being spit out for you, you need a different perspective in order to have a different view of the data. And so having someone who is more of a freer thinker (is what the future job markets will demand).” In other words, machines are great at repetitive, predictable tasks. Humans will still have to do a great deal of the creative work and critical thinking since they are still the only ones that can do those sorts of tasks. That means soft skills will be in greater demand than they currently are.

Career Readiness in the 21st Century

As technology fundamentally transforms the nature of work, the notion of a career is changing too. Trends amongst Millennials have seen a rise in the “gig economy” and “portfolio careers”. These young people perform many small jobs as independent contractors or hop between employers building a portfolio of projects they have worked on rather than following the traditional path of lifetime employment with a single employer. With rapidly changing markets, and increased availability of on-demand employment, the workers of tomorrow can also expect to have multiple careers in their lifetime.

Even those who remain in their industry or job are likely to require life-long training and skill-development to keep up with a changing workplace. A 2016 Pew Survey found that 87% of workers believe this to be true. Many experts agree, adding that the skills most likely to be in demand are the human ones that machines cannot easily replicate or automate. With these ‘soft skills’, workers will be better able to collaborate with their peers and with artificial intelligence (which are expected to become a mainstay of many workplaces, not just tech jobs).

At the very least, the worker of the future will have to be agile and flexible, able to keep their eyes on trends, and pivot in response to social, technological, and economic pressures. Specialized training for one particular industry or career could pigeonhole workers, leaving them vulnerable to changes in the job market. In such an environment, students will have to learn how to think, not what to think. As astrophysicist Neil DeGrasse Tyson says: “Knowing how to think empowers you far beyond those who know only what to think.”

While it may be tempting to think of these trends as a far-off future, a look at the demands of today’s employers suggest that the future may already be here.

The 2016 Job Outlook survey conducted by the National Association of Colleges and Employers, found that hiring personnel increasingly value and prioritize the skills developed in Liberal Arts institutions. Of those polled:

Others, including the World Economic Forum, have made similar claims, citing a need for skills like: complex problem-solving, creativity, coordinating with others, cognitive flexibility, boundless curiosity, and deep generalism.

The programs and pedagogical philosophies of Liberal Arts schools make them incubators for these skills. Whether its writing across the curriculum or community based learning, the programs they implement produce graduates that are better suited to the demands of today’s job market.

Even with skills like software coding which are still in incredibly high-demand, employers have a need for softer skills that will help with dynamic or massive-scale projects that would be impossible to do in isolation.

“…those who excel in STEM understand that there are non-technical considerations that should guide their work, and those who study humanities understand that there are powerful problem solving mechanisms and tools that can open up new avenues of application for their knowledge. We need those with strength in the humanities to feel comfortable talking with those who have strength in STEM, and vice versa. This isn’t either-or, we have to expose students to both.”

Liberal Arts to the Rescue

In light of the challenges revealed by the situations described above, an unlikely, often overlooked solution emerges: Liberal Arts education. Tomorrow’s job markets demand creative, collaborative workers to reinvigorate and reshape our social and educational structures as well as our business models. To do so, graduates need open minds and rich, diverse educational experiences from which to draw. The fundamental values of a Liberal Arts education, with their emphasis on a general education and creating well-rounded graduates, expand students’ abilities to think through various challenges, contradictions, and tensions by design.

The goal of liberal arts institutions is the cultivation of the “freer thinkers” Mark Cuban cited in the earlier quote. Though each school’s mission is slightly different, most aim to produce leaders who are lifelong learners, make thoughtful life choices, succeed professionally, and commit themselves to cultural understanding. With a student-centered focus, these schools engage attendees with a wide variety of learning experiences, better preparing them for the challenges of our time.

As the aforementioned study suggests, liberal arts graduates may have a slower start than their counterparts, but the skills they develop help them become leaders in their fields. They are better at collaboration and generally better prepared to share their complex thoughts and findings with their colleagues—a major advantage for those looking to climb the career ladder and solve the world’s trickiest problems.

By exposing students to a wide array of topics and experiences, liberal arts students develop the sorts of soft skills that make better at the sorts of tasks employers demand. Furthermore, schools implementing High-Impact Practices actively instill a lifelong love of learning in their graduates—a trait that will serve them well in the job markets they are sure to face.

With the cost of a college education rising and pressures around student debt setting in, a significant number of parents, prospective students, politicians, and the general public remain skeptical. But as we’ve seen in the evidence above, this skepticism is deeply misplaced.

Still, states like Tennessee are tying education to jobs, viewing colleges as employee pipelines. Senators call for increased vocational training, and coding academies pop up across metropolitan centers. Nevertheless, the very institutions with long term solutions to prepare students for 21st century jobs are too often overlooked. Considering the skills gap emerging in the United States, the temptation to buy into a simple solution is understandable, but that seeming simplicity is deceptive. College graduates simply can no longer afford to to be locked into a single discipline or vocation.

At Colleges of Distinction, we’ve been championing liberal arts values for nearly two decades, endorsing top institutions who cultivate excellent student experiences and implement best practices. We regularly see the impact these schools have on the lives of their alumni both during school and after. The schools we endorse and feature in our yearly guidebooks are a strong sampling of the best American liberal arts education has to offer.

Each one offers great teaching, engaged students living and learning in vibrant communities as well as programs to ensure their success post-graduation. Many of them are the ‘hidden gems’ of academia—small schools with excellent programs that don’t always have the name-recognition of similar schools.

Looking at the facts and projections, the outlook is fairly conclusive: these are the kinds of schools that will produce the best-prepared workers of the 21st century, and there’s never been a more important time to attend one. Sending your child to a liberal arts college or university will make them better citizens, workers, and well-rounded human beings, ready to adapt to whatever life throws at them. It’s time to put the negative attitudes to rest and reconsider the value of a liberal arts education.

This article was originally posted in the HuffPost.

Founded by Wes Creel in 2001, Colleges of Distinction helps high school students and parents navigate the college admissions landscape. Through their yearly guidebooks and third-party college endorsements, prospective students can find the school that fits them best. Colleges of Distinction will release their 2017-2018 Guidebook in September 2017 and Reaching Beyond Rankings: How to Use College Evaluation Systems to Find Your Dream School in November 2017.”

Wes Creel founded Colleges of Distinction in 2001. The organization helps high school students and parents navigate the college admissions landscape. Through their yearly guidebooks and third-party college endorsements, prospective students can find the school that fits them best.