FLINT, Mich. — The play was written in 1882, originally set in a small town in Norway — about as removed as imaginable from the daily struggles of this Michigan city. But as an adaptation of Henrik Ibsen’s “An Enemy of the People” played out over the weekend on a basketball court in a building that was once a Flint elementary school, the echoes were uncanny. 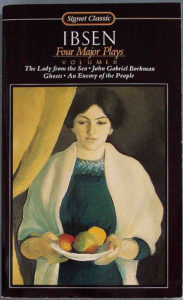 A doctor discovers a tainted water supply and speaks up about it.

Some leaders question the findings and try to keep the news quiet, and the doctor is widely mocked.

“So we have animals in the water that nobody can see?” one character says, incredulous.

Since revelations of Flint’s tainted water emerged almost two years ago, this old play has drawn new interest around the nation. Adaptations are now planned on Broadway, at the Goodman Theater in Chicago, at The Guthrie Theater in Minneapolis and elsewhere. But the version performed here — “Public Enemy: Flint” — by a collaboration of theater companies from Los Angeles to London, found personal, painful resonance in the risers around this gymnasium-turned-theater. For a few hours, the residents of Flint were able to sit back and watch someone else grapple with the sort of problems that have consumed their city.

To read the entire article, go to the NYTimes.