What’s Your Major? Exploring the Arts and Humanities ~ a student-run workshop

This past week, I hosted an event called, “What’s Your Major? Exploring the Arts and Humanities.” Originally, I had planned to host an alumni panel event at Union and invite students to come and hear from successful graduates that worked within the arts and humanities. After some planning, I realized that this event would target upperclassmen who had already decided to major in the arts and humanities, and I wanted to create an event that was geared to undecided students.
I decided to host an event in a first-year residence hall because most events on campus 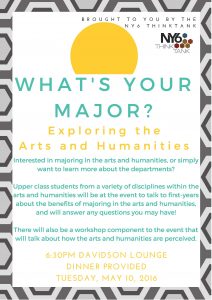 require students to attend panels in classrooms, and I wanted the event to be informal and approachable, and not feel like a “required” event. Students at Union do not typically declare their majors or minors until their sophomore year, and during their first year students often struggle with figuring out their course of study since they have not had the opportunity to candidly ask questions to upperclassmen. Since I am a NY6 Think Tank Fellow working to promote the arts and humanities on Union’s campus I decided to invite successful upperclassmen from a variety of fields within the arts and humanities to come speak at the event.

The first part of the event featured a workshop session where I talked about the goals of the NY6 Think Tank, and I opened a discussion about the perceived value, and lack thereof, of majoring in the arts and humanities. I asked the first-years what they were intending to study, and many responded with “economics” or “engineering.”

When I asked the students why, they responded that these areas of study seemed to lead to job offerings and were valued by employers. I then asked the students to write down a stereotype about someone who majors in the arts and humanities on a post-it, and stick it on a poster so that we had a clear visual for the group. I then read the post-its aloud and some of the responses were “broke,” “not too many job opportunities,” and “not athletic.”

I then proceeded to talk about how there is a growing body of research that demonstrates the value of studying the arts and humanities and that they create students who can critically think, effectively communicate, and have creative impulses. I set up a scenario where two economics majors applied for a job at a high-powered business on Wall Street. One person only majored in economics, and the other double-majored in economics and music. I then articulated that the applicant who majored in music had “added value” over the other applicant since they brought a whole other set of skills to the job and had demonstrated a passion of theirs.