Calling All Writers! A Wave of New Jobs at the Intersection of Human and Artificial Intelligence

As tech behemoths and a wave of start-ups double down on virtual assistants that can chat with human beings, writing for AI is becoming a hot job in Silicon Valley. Behind Apple’s Siri, Amazon’s Alexa and Microsoft’s Cortana are not just software engineers. Increasingly, there are poets, comedians, fiction writers, and other artistic types charged with engineering the personalities for a fast-growing crop of artificial intelligence tools. 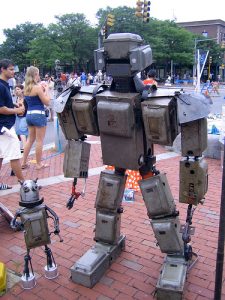 The rise of this technology is evident in a wave of new jobs at the intersection of human and artificial intelligence. By 2025, 12.7 million new U.S. jobs will involve building robots or automation software; by 2019, more than one-third of the workforce will work side by side with such technologies, according to Forrester Data.

The Switch
The Next Hot Job in Silicon Valley is for Poets
April 7, 2016