The bonds of kinship which unite the human race are those which lead to ethical decision making.

While this may be a strong assertion to make up front, I beg you to consider the bonds that are formed within the walls of our small, Upstate New York liberal arts college. My knowledge of ethical behavior, or the rights and wrongs in life, have been reinforced through my time at Union College, an environment where I feel that ethical behavior flourishes for many reasons.

I offer a series of decision making which has followed me through my academic years focusing on the concept of cheating. Most people, if asked, would proclaim that of course cheating is unethical, and of course they would never do it.

But when you live life through the eyes of a shy, smart, “over-achiever”, as so many of us at Union have, you see that more people in life will try to take advantage of you than you could have ever imagined.

Too many times throughout my elementary, middle school and high school experiences did someone sit next to me and peek at my paper during a pop quiz. Too many times did kids run to my side when a group project was assigned, because they knew I would complete their portion of the work when they faltered.

For so many years I would have pegged my peers, the anonymous faces around me in a sea of adolescents as I graduated, as the unethical people. Upon paving my way to Union College I promised myself that never again would I let others get ahead on my account. However, it was at Union where I learned what truly was happening to me all of those years.

Union is smaller than my high school and far more intimate. I see the faces of people I know every day because I had a class with them once, an interaction in the coffee line, held a position with them in a club or met them out on a weekend. Union offers the ability for people to graduate from a college that rings synonymous with community. That community is based on a vast curriculum, where everyone finds a place, as well as their potential. When one achieves such a feat, I argue that their convictions grow in a way that will change them forever.

In this community I have watched myself as well as other people grow right by my side. I have watched my best friends find their passions and the ability to pursue them. I have watched my classmates challenge my points and make me a smarter person for it. I have seen people who were once shy as freshman unable to speak up in a classroom, now as seniors emerge as the life of a topical debate. I have watched as friends encounter unethical behavior, and against popular opinion, challenge it.

As I pondered the instances at Union that were prompting me and my peers to make these decisions, I realized that it was the lessons that we were learning inside the classroom and then teaching one another. The books and movies which were shaping our education were at the same time inspiring us to speak out for what we believed to be ethically sound. An admiration for those who were acting justly was ultimately leading us to act the same, and the lesson of standing up for what you believed ethical was becoming a lived experience.

We learned this lesson when my “Environmental Politics” professor assigned a reading of Not One Drop by Riki Ott, a marine toxicologist from Cordova, Alaska who lived through the Exxon-Valdez oil spill and fought tirelessly for the justice of her neighbors. Against the billion-dollar-a-year oil company, Ott assisted in the filing of lawsuits, protested with her fellow Alaskans, all the while managing to write a book about the wrongdoings of the corporation, instead of settling for a reparations payment that covered only a fraction of the damage.

We also learned this lesson when an “Anthropology of Humans and Animals” professor assigned the film Food, Inc. directed by Robert Kenner, who told Americans exactly where their food was coming from. Warning against the unsustainable economic and environmental nature of the current food production system, Kenner sent shockwaves through big businesses who were leveraging poor farmers and misleading their consumers.

In “Introduction to Political Thought” we learned the same lesson again, when reading Judith Butler’s Precarious Life. Her writing prompted Americans to look at mourning 9/11 outside of the ethnocentric views of our culture, and develop empathy for other human lives despite their race. Butler may not have spoken to the popular opinion, but she stood up to provoke thoughts that felt unsavory to Americans and radically changed the way in which we view tragedy.

The small liberal arts school in which I have spent the past four years has taught me that no place in the world is devoid of unethical behavior, and what is more important is the ethics of my response. At Union I would not be afraid to stand up, confidently, and share my opinion with a peer that they were doing something wrong. What is even more reassuring is that I have rarely ever felt the need to do so. How lucky am I?

That will not always be the case and I am well aware, and well-prepared. In any career path there will be someone who tries to take credit for the work of others or those who take advantage of others with monetary leverage. While those people, the unethical, may never cease to exist, it is a matter of how you choose to address their behavior. Do not let the unethical thrive. Stand up for yourself, your convictions and what you believe to be right.

In a small community where every student has the chance to grow and shine, whether that be in the writing of a senior thesis, being the president of a club that they themselves created or as a research student pioneering a hypothesis by the side of their professor, their confidence in ethical decision making grows with them. The small liberal arts curriculum reinforces not only how, but why it is so important to defend ethical behavior and abide by it each day.

It was not those children all of those years ago who needed a lesson in ethics, it was me. I needed to learn that knowing what is right and wrong is only half of the battle; the other half is asserting to others that you know, and that you will defend yourself until the end. 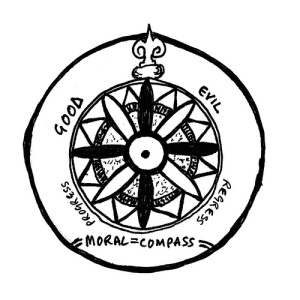 It is the bonds of kinship at Union College that have taught me the true meaning of respect, which is the very core of ethical behavior. Recognize that it is never too late to connect with others and to respect them — but most importantly do not forget to respect yourself. Do not sit idly by when unethical occurrences arise, stand up against the evils of the world even when those around you are not ready to do the same. Carry that respect and confidence with you at all times, from high school to the workforce or your place of higher education, and that is where you will find your success.

Carina Sorrentino is a senior at Union College majoring in Political Science, with minors in Anthropology and Classics. Between writing furiously on any facet of campus life, she enjoys meeting interesting people and having thoughtful conversations over coffee.