The Undeniable Necessity of Ethics in the Workplace

What is the role of ethics in the work environment? As college students, we have an opportunity to choose ethical or unethical behavior in the classroom every day—right now the classroom is our workplace.  Will we take the easy way out? Will we look over at Jane Doe’s desk to see her exam? After all, it’s a difficult course, and none of us wants a bad grade on our transcript. We might think that we need to engage in unethical behaviors to get ahead, and to remain in the game, so to speak. However, we must trust that so long as we work extremely hard, strive for excellence every single day, and hold ourselves to core moral and ethical standards, we will succeed. 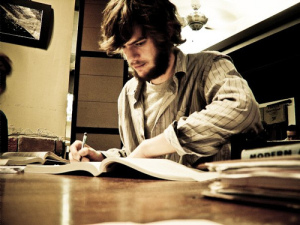 Union College’s Ethics Across the Curriculum program and Honor Code reflect this belief and indicate the necessity of instilling values in students on the verge of entering a world filled with temptation and fraught with turmoil. You don’t have to be a philosophy major to understand and appreciate the value of being a person of integrity and striving to behave in a thoughtful, ethical manner, no matter what your job title or work environment.

As we prepare to leave college and enter the workforce, it’s interesting to note that one of the most important traits employers look for when recruiting new hires is integrity. In fact, some say that honesty and trustworthiness are even more crucial factors in whether or not a candidate will get the job than GPA, extracurricular activities, or what school the prospect attended.

Clearly, people want to work with someone they can trust to do the job they are hired to do. Think about it: if you owned a company, would you want your hard-earned revenue going into the paycheck of someone who lied, cheated, and stole from you, or who otherwise engaged in unethical behavior?

I was at a job interview a while ago where the employer asked me what I thought about competition.  I responded truthfully that I believe the most important person to compete against is yourself, and that while I recognize the value of a little healthy competition amongst peers in a work environment, such as competing for an “Employee of the Year” honor or award, it’s crucial not to push other people down or be a cutthroat competitor, but rather to behave with integrity. This, as it turns out, was exactly what the employer wanted to hear.

While pushing yourself to excel and even competing with others (in an appropriate manner) are both positive actions that often contribute to both individual and organizational success, it’s imperative to understand the nuance of this point. If you walk all over people and push others down while climbing the corporate ladder—even if because of it you achieve wealth and prestige— 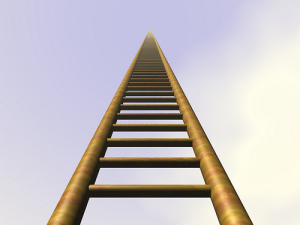 you will make many enemies, stir up resentment, and ultimately cause your own demise. In this example, engaging in ethical behavior might lead to rich friendships, career success, and happiness, while unethical actions will bring only isolation and emptiness. However, we must acknowledge that unfortunately, many unethical people in our world today are quite successful, both in terms of fame and fortune. What does this mean as we consider the value of ethical behavior in the workplace? It seems that despite the fact that this will continue to occur, there is a value in behaving ethically, even if no one is watching or notices your effort. Although behaving ethically might mean you might have to occasionally sit back and watch while your unethical colleague seemingly gets ahead, integrity is desirable regardless of the social or monetary payoff of morally corrupt behavior.

On a smaller scale, I believe there are ways to be ethical even if you consider your particular job menial. There is merit in behaviors such as performing every task to the best of your ability; not making up excuses for lateness or absence, but rather always striving to be honest; and owning up to your own mistakes, instead of blaming them on the nearest scapegoat. These actions are examples of ways to be ethical in the work atmosphere on a daily basis.

Additionally, I must also note the difference between ethical behaviors in one’s personal life versus the ethical behavior in the workplace. Are the two necessarily intertwined? Is it OK for the Governor to meet up with a prostitute, so long as he gets his job done and does well by his people? Or does the ethical value (or lack thereof) of his life choices provide insight into his character and have an undeniable bearing on his professional life? These are the questions we must ask ourselves if we want to understand the place ethics has in the work world, and in our lives. It appears that ethics in the workplace is an issue we must discuss and confront. In other words, someone’s integrity matters a lot in the professional world, whether we like it or not.

The reality is that we are confronted by unethical behavior all the time. We might witness a colleague lying about hours worked on a time sheet, or a hear a friend brag about the fantastic grade she just got on an exam as a result of cheating. We can be the victims of unethical behavior in the workplace as well, which can happen if, for example, a salesperson misrepresents the product or service they are selling in order to close a deal with us.  A person you work with might take credit for research or other work that, in fact, you did.

Moreover, we might even find ourselves predisposed to excuse this sort of unethical behavior in people with positions of power, even if not consciously. It seems as though every day there are breaking news stories about top level executives engaging in what we might consider scandalous or unethical behavior. One example is that of the pharmaceutical giant, GlaxoSmithKline, which in 2012 was forced to plead guilty to criminal charges and pay a 3 billion dollar settlement for failing to report crucial safety data about a popular diabetes drug, in addition to promoting a common antidepressant for unapproved usage.  Also in 2012, corporate giant Wal-Mart was found to have bribed an official to change a zoning map so that it would be allowed to build a store in a particularly desirable area that would attract a lot of traffic.

Then there are stories and movies like “The Wolf of Wall Street” where, it might be argued, these practices and habits of thinking are even lauded or encouraged. Power corrupts, as the old saying goes, and evidence of this manifests itself all the time. We witness this truth in Hollywood actors, investment bankers, politicians, and in the actions of people who surround us every day. 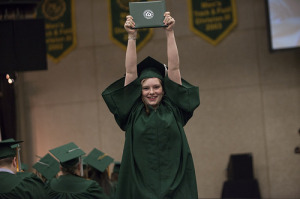 We must be conscientious and aware of these issues so that even as we reach for the stars and strive to achieve, we continue to hold ourselves to high standards and behave ethically right from the start. There are ways to be ethical in all facets of life—while running errands, taking courses, passing a homeless person on the street, navigating friendships and other relationships. However, we must recognize that behaving ethically in the workplace is of paramount importance to society, politics, the economy, and to humanity overall.

MaryGrace Wajda is a graduate of Union College with a double major in Classics and Philosophy.